The war himself , Prophet Odumeje spotted giving love As he gifts his wife an iPhone 11 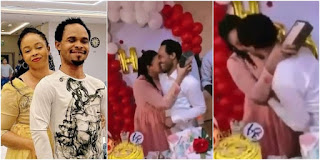 The General overseer of the mountain of liberation ministries ,prophet Odumeje popularly known as the Indabosky Bahose and a man of war has been spoted showing love to his wife on her birthday .

This was seen in a video which is still  going viral on social media at the time of this report .

The couple were seen in the mood of affectionate love as the prophet demonstrated his love for his wife by gifting her an iPhone 11.

The Indabosky , prophet Odumeje wnet viral in 2020 after a video of him claiming not to be a man of war was seen on social media.

However this has generated a lot of reactions as many social media users wondered how the man of war could be seen in such mood.