March 04, 2019
A 27-year-old Uber driver was fatally stabbed in the Bronx on Saturday night and he has now been identified as a Nigerian
Ganiyu Gandonu, 27, from Ogun State, was found shortly after 9 pm inside his Toyota Camry along the Hutchinson River Parkway East in Baychester, New York City, cops said. He was bleeding from his neck and torso. He later died at Jacobi Medical Center.
The police are looking for the attacker and investigating whether Mr. Gandonu’s death began as a robbery.
On Sunday evening, the police released video of a “person of interest” wanted in the killing. The man fled the scene on foot and was last seen walking northbound on Co-op City Boulevard wearing dark clothing, the police said.
The police did not say if the “person of interest” was a passenger. The driver was working at the time, but the police did not say whether he was completing a trip when he was stabbed.
Mr. Gandonu drove for Uber and had received his for-hire vehicle license in January 2017, according to the New York City Taxi and Limousine Commission.
He left home around 7 p.m. on Saturday to work a shift picking up passengers, but he never came home, his wife said in an interview with News 12. He had a 2-year-old son.
The deceased’s wife, Latifat Alimi, 24, said: “My husband doesn’t deserve this. I don’t know how my life’s going to be without him.”
I know for sure that he got no problem with anybody. He start this job. He worked. After work, he’s home. He don’t go to parties, met friends, go to clubs, nothing, nothing nothing.”

She also said that before her husband left for work, he complained, saying: “I’m tired, but I have to go and make money.”
They spoke on the phone shortly before 9 p.m. that night but the call was cut short when Ganiyu picked up a ride.
Latifat said: “He said, ‘I’ll call you back. I have a customer.’ “ 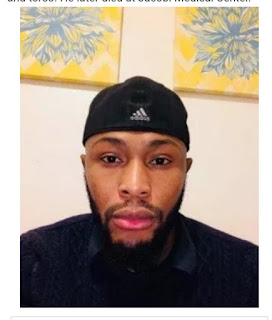