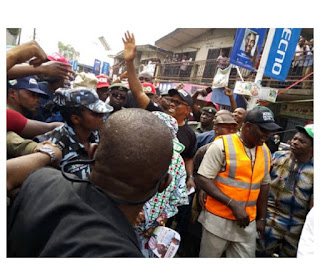 The Vice-Presidential candidate of the Peoples Democratic Party, PDP, Mr Peter Obi, and the party’s governorship candidate in Lagos, Mr Jimi Agbaje, on Wednesday set the popular Computer Village in Ikeja, and
Ladipo Auto Spare parts Market, Mushin, all in Lagos on fire as their campaign train berthed at both markets.
The two candidates, alongside the party’s deputy governorship candidate in the state, Mrs Haleema Busari and others, walked round the market interacting with traders and visitors alike.
At the Computer Village, Obi and Agbaje held a meeting with officials of Computer and Allied Products Dealers Association of Nigeria, CAPDAN, before going round the market.
The duo acknowledged cheers from an excited crowd of people who chanted their support for them as they moved from one location to another.
Party faithful and supporters together with traders and visitors danced to lively tunes from flutists and drummers on the candidates’ train, giving it all a carnival-like atmosphere
Business activities were partially suspended at the market as many shop owners shut their shops to join the moving train while those who stayed open watched from their shops.
It was indeed a herculean task for the security details escorting the candidates to control the crowd as they massed around them in an effort to shake their hands.
The candidates who arrived the market at about 10 am, left around 12. 30 pm for Ladipo Auto Spare parts Market in Mushin.
At the Ladipo market, it was the same experience as Agbaje and Obi also moved around interacting with traders and visitors.

The crowds chanted their names as well as that of the party’s presidential candidate, Atiku Abubakar bringing smiles to the faces of the duo.
The visit brought traffic to a standstill for some time within the market due to the crowd wanting to see the candidates