November 22, 2018
The Borno state Governor , Shettima  has dropped a heavy criticism, denigrating Jonathan's recently lunched book  titled, " my transition hours "
Shettima opined that the former president gave false account on the chibok girls abduction in his book
Shettima who made this view known via a press statement issued by his media adviser, Isa Gusau, wondered how the former president could speak about the abduction when ”he had never believed any girl was abducted”.
Governor  Shettima  described the book as “elementary book of tales"  and also accused Jonathan for  lying about the issue of the Chibok school girls.
Aso Rock Legit.ng gathers that the book focused on the former president’s last days in office in 2015 and controversies regarding his eventual acceptance of defeat.
Jonathan at the event also talked about the ‘intrigues’ trailing the abduction of the schoolgirls, as captured in his book. In Chapter 4 of the book, the former president reportedly blamed the inability of his government to rescue the girls on the then opposition All Progressive Congress (APC), which was in control of Borno state then. He also criticised former US President, Barrack Obama’s administration for failing to assist his government in rescuing the kids. However, in a swift reaction on Wednesday, November 21, Governor Shettima accused the former president of an attempt to “sweep under the carpet the incontrovertible facts about how his (Jonathan) government mishandled the issue of the abduction.” Shettima made this view known via a press statement issued by his media adviser, Isa Gusau, he governor also said “he took the whole of Tuesday night to read the former president’s book. He alleged that Jonathan deliberately omitted details of the presidential fact-finding committee he belatedly constituted to investigate how the girls went missing in Chapter 4 of his book ”where the issue was extensively discussed”.
The former president claimed that the mass 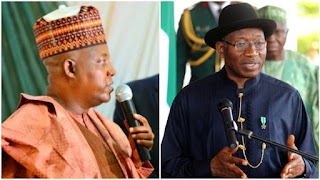 defection of some former governors of the Peoples Democratic Party (PDP) to the then opposition All Progressive Congress (APC) cost him his bid to be re-elected for a second term in office. Jonathan who lost the 2015 presidential election with just over 2.5 million votes also reportedly blamed northern leaders who wanted power returned to their region for sabotaging his re-election bid. These claims are also reportedly contained in the new book about his tenure in office.