If I’m rearrested, this country will burn” – Nnamdi Kanu

Nnamdi Kanu, leader of the Indigenous People of Biafra (IPOB), on Saturday granted an interview to The Sun, where he discussed the actualization of Biafra, the planned boycott of the Anambra Elections, and the Federal Government asking the High Court to rearrest him for flouting bail conditions.

Kanu said the support he has gotten from his tour of “Biafran territory” has never been replicated by anyone, not by any visiting dignitary, Head of State, political or religious leader.

He said it is the people’s civic responsibility to boycott the Anambra elections, adding that a “total and absolute boycott” will be implemented.

On President Muhammadu Buhari‘s speech upon his return from his over 100 days medical vacation, Kanu said he doesn’t believe the president wrote the speech.

He asked why those calling for his arrest have refused to call for the arrest of the coalition of Northern youths who gave the quit notice to Igbos to leave the North before October 1.

Asked if he was afraid of being rearrested for flouting bail conditions, Nnamdi Kanu said:

I don’t care! Quote me verbatim. If I’m rearrested, this country will burn, I assure you.

From where that oil money they depend on, they can no longer have access to it. I assure them that. This is not empty threat.

We’re IPOB, we don’t abandon our own.

Kanu said he still has plans to visit Lagos and Kaduna like he stated he would. He said:

I have a lot of friends in Lagos and Southern Kaduna too. When the time comes, I will visit those places.

You spoke about my security, but I’m telling you that I’m not living any more.What you are seeing is but an empty shell that is only seeking for Biafra 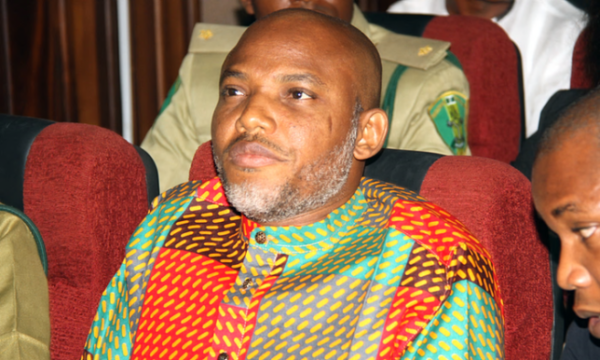