According to the police, this was in a bid to prevent a breach of the peace, which may result from the activities of Biafran agitators ahead of the upcoming Anambra State governorship election.

The police also said it was waiting for the court to give a go ahead for the arrest of the Indigenous People of Biafra leader, Nnamdi Kanu.

Nigerian Government had last week demanded that the Federal High Court in Abuja revoke the bail granted to Kanu.

Speaking to Punch, the Force Public Relations Officer, Jimoh Moshood, said “We have made additional deployments, particularly in Anambra State, because of the upcoming governorship election and also to other South-East and South- South states to ensure that IPOB did not actualise its threat of stopping the election.

“So also, any pronouncement from the court would be strictly enforced, irrespective of the persons involved.

“Nobody is above the law, so any court pronouncement would be enforced by the police.

“We are strictly monitoring the situation for any eventuality from the court, since there is an ongoing judicial process.

“We are not leaving anything to chance; we are to ensure there is law and order and any pronouncement from the court would be strictly enforced.

“We are watching the situation closely. We have made enough deployments and we are going to act appropriately.

“We have yet to deploy helicopters because the situation is not ripe for it.” 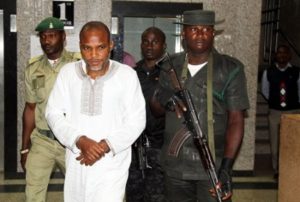