Another Conjugal bliss takes place in the football world as Lionel Messi ties the knot with his childhood friend.

The soccer world has recorded yet another conjugal bliss as the Argentine and Barcelona   footballer, Lionel messi ties the knot with his Childhood  girl friend Antonella Roccuzzo.

The wedding which took place in the soccer star's home town had in attendance,  260 guests including,  50 football stars and several  security operatives  for security reasons.

According to vanguard news, mercy met Roccuzo who happens to be his best friend's  cousin at the age of 5.

Reports  had it that Mercy did not invite his former coaches and several Agentina's big footballers to the occasion.

Journalists were also not given full access to the event while private security  men were contracted to keep the event safe and prevent gate crashers. 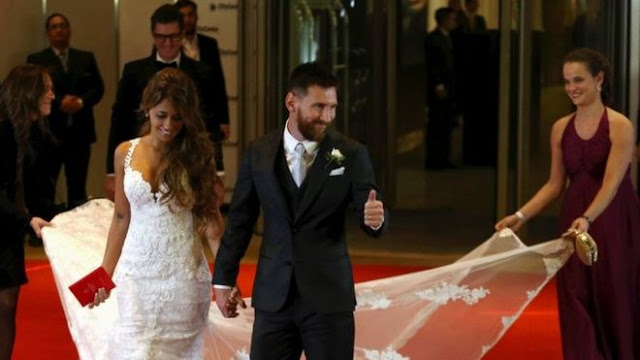